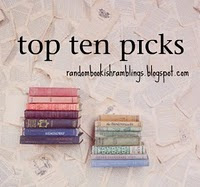 One of my favorite book bloggers, Random Ramblings, has been doing a top ten picks series for a few months now. I've been meaning to join in but I keep forgetting! So, I'm going to be playing along, catching up! They are on week 17 of these so I'll be doing a number of these for the next little bit, trying to catch up! This is my first ...


Top Ten Picks: Series
This is tough for me because I'm a big fan of the series ... but here are my top ten series (in no particular order) ...
1. Harry Potter series by J.K. Rowling
2. Anita Blake, Vampire Hunter series by Laurell K. Hamilton
3. Sookie Stackhouse series by Charlaine Harris
4. Outlander series by Diana Gabaldon
5. Rachel Morgan/The Hollows series by Kim Harrison
6. Women of the Otherworld by Kelley Armstrong
7. Stephanie Plum series by Janet Evanovich
8. Kinsey Millhone series by Sue Grafton
9. Nina Reilly series by Perri O'Shaughnessy
10. Harper Connelly series by Charlaine Harris
And that's my top ten ... what's yours? I'd love to hear about series that you read that I might want to check out! Leave me some comments and introduce me to some of your favorites! Also, I just realized that ALL of my picks are written by women! How cool is that!
Posted by Amy at 1:09 PM

Authors and publicists are welcome to contact me at the e-mail address below if they would like their books considered for reading and reviewing here.

Odd Girl Out: The Hidden Culture of Aggression in Girls
by Rachel Simmons

A Change of Heart
by Sonali Dev

When Stars Collide
by Micalea Smeltzer

Sparking the Fire
by Kate Meader

Escorting the Player
by Leigh James

Photo for header by guldfisken